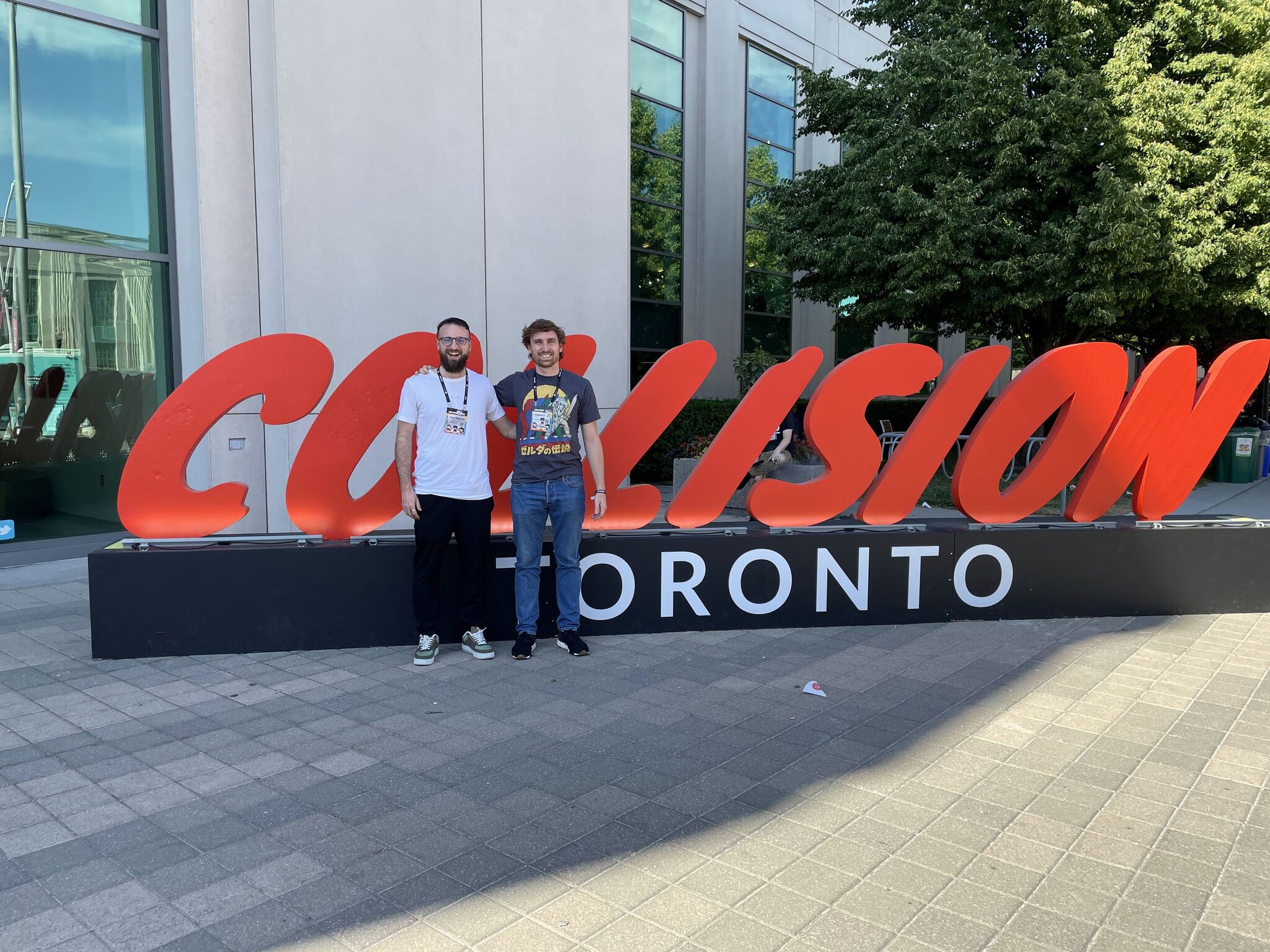 To fully encapsulate in a single blog post what the Collision experience meant for us would be a bit of an overreach, but we’ll definitely try. Such a major event, which brings together Fortune 500 companies, all manner of startups and world-renowned speakers, inevitably sends shockwaves across the tech world that spark countless articles, LinkedIn posts and impactful corporate decisions. As such, we believe that we can contribute the most by focusing on our perspective.

The conference’s four stated objectives are: Networking (meet your peers, make meaningful connections), Learning (of insights from people facing all sorts of challenges, via inspiring talks or casual encounters), Lead generation (a globally diverse melting pot of talent, innovation and investment potential) and Exposure (all the major media outlets are there, such as Bloomberg, CNN and Wall Street Journal). In 2022 they brought back in-person attendance, with an impressive list of participants that goes beyond the IT industry, including: Margaret Atwood (author of “The Handmaid's Tale” and many other great books), Lupita Nyong'o (Oscar-winning actor and shareholder of Kukua, a Nairobi-based media and tech start-up) and Carmelo Anthony (NBA All-Star player and founder of the global content company Creative 7).

We had high hopes for the trip and prepared more than the requested materials (such as a 30-second business pitch), but soon upon arrival at the Enercare Centre in Toronto we realized that Collision was going to surpass even our wildest expectations.

We left for Toronto on June 16, the Thursday before the week of the Conference. SpaceDev’s own Juan Manuel Sobral, Federico Sendra and Ilan García went as part of a Uruguayan delegation that included Light-It, Lithium, SomnioSoftware, Tryolabs, Houlak, Abstracta, GDW-GoDoWorks, Onetree, Lineup, B r o k e r w a r e, GoGrow, Unimate RPA and TuPase. Now, this is what you might call a strong sample of Uruguay’s stature as a coding powerhouse and force of innovation! A big thanks to Smart Talent – Uruguay XXI and Cuti – Chamber of Uruguayan IT Companies are in order for organizing the trip and enhancing the experience.

Toronto is truly an unforgettable city. Constantly expanding and evolving, it’s host to a vibrant local scene powered by young people, diversity and cosmopolitanism, amazing food, budget-friendly options, solid public transport and general safety. It overlooks Lake Ontario and a small island right across from the coast. We ferried there and couldn’t believe the beauty and size of that national park.

One of the best things about Collision is that there’s something for everyone. The LatAm Startups Conference was right up our alley so we were eager to attend. A sponsor for Canada’s Startup Visa program, “LatAm Startups” is actually a non-profit accelerator based in Toronto that helps small international companies enter the North American market.

For us, it was sort of a warm up to the Collision itself. The event’s speaker was Diego Cibils from KONA, who sold the company in Canada after participating in the program. The talk was truly encouraging and we got to talk with Diego afterwards, who shared advice about transitioning from a service-based company to a product-based company.

A bit of underrated wisdom: you end up meeting a lot of interesting people on such occasions as during lunch. We were randomly in the vicinity of Tony Duckett, director at xiBOSS and xiVentures Fund Inc. (who went to Uruguay three times already!) and we hit it off immediately. One of those amazing encounters that yield cherishable memories and potential partnerships!

Despite insane schedules and 35.000 people in attendance, somehow you always found yourself having a meaningful interaction with someone. Events like this have a crucial impact on every participating company, and as an extension, on the tech industry as a whole (and those industries affected by it!)

Hands down, the hidden gem of the Collision Conf were the roundtables. Forget about the bustling crowds, sit in a circle with about 20 other individuals and CONNECT. After a round of introductions, an industry shaper would lead a discussion on several topics and everyone was allowed to voice their opinion. To say these exchanges were nurturing and indispensable would be an understatement, especially because they came directly from personal experience.

The first one we attended was WHAT GLOBAL LEADERS NEED TO KNOW ABOUT NFTS, hosted by Iris Nevins from Umba Daima. Iris’ NFT business made more than US$200,000 in its first year! We shared insights on current and future uses of NFTs, which was later expanded upon by Iris in a talk the following day. It was here that we met Tim Cotten, CEO of Scrypted, a company working on Metaverse projects, as well as Bruno and Carlos Gallardo, CEOs of Empack Graphics, a Mexican marketing and tech investment company. Overall, a fantastic way to start the series of roundtables.

Next was THAT THING YOU’RE OBSESSED WITH, hosted by Primetime Emmy Award winner Elan Lee, founder of the famous card game Exploding Kittens, which has a Netflix animated series in the works. He invited us to talk about our passions or what drives us forward in a laid-back way, no pitches or any sort of pressures involved. This roundtable not only rocked, it also provided us with a much needed breather in the middle of an intense event. Thank you Elan for the social oasis!

After lunch, we attended our final roundtable (each company could sign up for a maximum of three to allow room for everyone): WHAT’S THE KEY TO DRIVING CUSTOMER LOYALTY AND REDUCING EMPLOYEE BURNOUT? YOUR DEVELOPERS, which was hosted by Christine Spang, Nylas CTO and co-founder. It’s no surprise to anyone that high stress plagues all areas of the tech industry and developers usually get the worst of it. It was great to go over the root causes, which we nailed down to time management, communication of expectations and company support, and discuss some possible solutions - at SpaceDev, for instance, we offer our developers 1 on 1 counseling and coaching. We were a bit star-struck to meet Christine, since we’ve used Nylas to craft some of our products! However, she remained down-to-earth throughout the roundtable and really shed light on this important issue.

We finally got to meet Hussein Hammoud in person, NDAX’s CTO and Co-Founder. We helped them create Canada’s leading crypto exchange, one of our proudest collaborations. We had a great time catching up about the past couple of years. To our delight, NDAX’s users have grown to the hundreds of thousands!

We were blown away by Breno Araujo’s Boto, a no-code automation platform for crypto, NFTs and other blockchain activities. This will surely have a considerable impact since it involves highly customizable price alerts for digital assets. Hats off to them.

We were also very impressed by Christopher MacDonald’s Blawesome, Hamza Gheewala’s Tama Technologies, Dominique Duchesne’s Positive Degree, Robert Balazs and Sayan Roy’s ByteX, Michael Dabydeen’s UREEQA Inc., Laura Eichhorn from Award Pool and Alexandra Gillam’s Appnovation. The list goes on, but we must stress how unique their visions are and how powerful the reach of their contributions. We can’t wait to see what the future holds for them!

We attended several talks, putting us on the receiving end of incredible insights by some of the biggest shapers in the industry, among them Gavin Wood (Polkadot), Thomas Dohmke (GitHub), Brian Shroder (Binance.US) and Charles Hoskinson (Cardano). We took several key moments to heart and extensive notes which ended up being very actionable.

If you asked us what was the most climactic moment, it would be the final of the Startup Pitch Competition. Early-stage startups had been battling it out live on a stage since the beginning of the event. Then, medtech DOT Mind Unlocked, media augmentation platform Modu and fintech Xare made it to the last stage, which took place on the final day of Collision. The judges were FPV Ventures managing partner Wesley Chan, Bessemer Venture Partners partner Mary D’Onofrio, and CAE’s Carter Copeland. Congratulations to the Ottawa-based DOT Mind Unlocked for winning! A well-deserved prize for a company with a relevant goal: providing tech-enabled solutions for improving mental health. We salute all of the participants!

We returned home with plenty of indelible memories and invaluable connections. It’s both humbling and empowering to be around so many different companies with such a wide array of missions and products. Perhaps the unifying theme is that we’re all trying to use technology to change lives and that’s a great feeling.

We were very happy to see that blockchain and web3, our main field of expertise, is experiencing a massive boom in Canada. New and exciting regulations are partly responsible for this, which should set the example for most countries. Uruguay, the first country in the world to legalize marihuna, could also be inspired by their approach to the cannabis industry. Actually, both countries have gone back-and-forth after Canada legalized it in 2018, but their current regulations and logistics, such as the way dispensaries are set up and distributed, are on another level.

Attending the Collision conference is a must for any business or individual working in the tech world or any industry adjacent to it. It’s a supercharged 3-day marathon that yields innumerable benefits and unforeseeable ramifications. The biggest shout-out should go to the organizing team, who did a splendid job of pulling such an epic extravaganza. It was a truly incredible experience, tech-wise but especially on a human, let’s-sit-down-and-chat level. We celebrate gratefulness and growth, key concepts which continue to resonate in our heads.